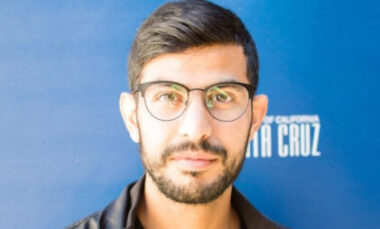 Babak Farahmand (John R. Lewis ’20, Computer Science) came to the U.S. as a refugee from Iran six years ago without any money, connections, or understanding of the English language, but managed to graduate debt-free.

Farahmand was determined to pursue higher education, transferring to UC Santa Cruz from Berkeley City College in 2018. Although this was a huge accomplishment, he struggled to find the right support along the way, and was unfamiliar with the university system. A fierce optimist, he was dogged in finding resources.

When he first arrived at UCSC, he didn’t know who to turn to for help in navigating the campus. Without a support network, he says he didn’t even know what questions to ask. He also felt immense pressure to graduate from UCSC in two years or less—taking longer wasn’t financially feasible since he had to work full time to support himself.

Then he found the Services for Transfers and Re-entry Students (STARS) office, where staff explained STARS’ services and showed Farahmand how to apply for a campus job.

For the rest of his time at UCSC, Farahmand held several on and off-campus jobs, including developing the website for the Genomics Institute, working on DEI initiatives in Baskin Engineering, and working at a construction company in Capitola. All the while, Farahmand managed his own small consulting business DamianoDesigns, which he founded in 2016.

Eventually he became fluent enough in the system to access financial aid, but was only able to utilize it for a small portion of his tuition. Farahmand graduated from UC Santa Cruz debt-free predominantly through his own efforts to support himself.

Farahmand wasn’t shy about asking for resources, but his other obligations limited his ability to access them. As a full-time student working full-time hours, Farahmand says he missed out on multiple opportunities to advance his career in Computer Science. He could not attend career fairs, join clubs and organizations, and he struggled to find a community and build relationships.

“I missed out on internships since paid internships were the only options; I had to have an income,” Farahmand said. “Personal networks play a huge role in getting those internships— networks I didn’t have access to.”

He said this resulted in a lot of stress since he didn’t have time or access to networks to help him find a post-college job.

Approaching graduation, he applied “to a lot of companies, hoping to get his foot in the door anywhere in the world.”

“I reduced my personal footprint to two suitcases so I could fly at a moment’s notice to any location,” Farahmand said.

He took the very first job he was offered as a Solutions Architect. In this position, Farahmand learned what he loves doing most: Blending his technical knowledge with his people skills. Eventually, he decided to leave the job as he was averaging 12-hour work days including weekends.

Now living in Oakland, Farahmand’s goal is to work as a sales engineer where he can utilize his technical, social, and problem-solving skills hand-in-hand.

Farahmand is proud of his resiliency and education that have provided him the opportunity to travel so far in the last six years—and are ushering him into his future.